Posted on July 5, 2018 By sailingshenemere.com in Uncategorized

This paints a picture of the Nassau to Exumas passage…foul weather gear set out to dry and an exhausted wayward bird taking a rest up front after a rough night crossing. We were rewarded by the gin clear waters our approach to Staniel Cay

Staniel Cay has long been a cruising mecca of the Central Bahamas because it’s central, it has an airstrip and easy access to have anything you need shipped easily directly from Ft. Lauderdale, FL. Good Facilities, two marinas, adequate stores. Very attractive settlement, neat, compact and is home to the legendary Thunderball Cave…Amazing!
It has the coolest laundry mat…convenient, new machines, a beautiful view and it has a bar with wi-fi so you can easily surf the net, drink a beer and chat with fellow cruisers all while washing your laundry and troubles away.

Thunderball Cave
A dramatic dive! Be sure to go when there is plenty of sunlight; ideally strong overhead sun works its magic. Inside the cave you have surface airspace, a high dome above your head with shafts of sunlight slanting down into the water; the effects are enchanting. Best time to dive is low tide. Take some bread in a plastic bag to feed the fish. 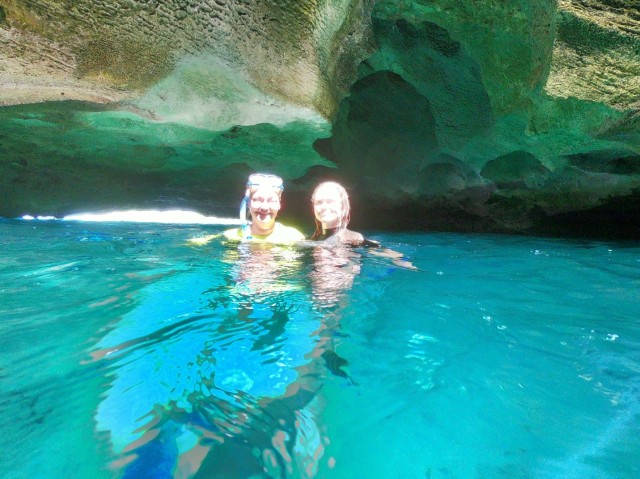 Andros to Nassau or West Bay?

Posted on July 5, 2018 By sailingshenemere.com in Uncategorized

Why do most Cruisers go to Nassau? How about West Bay? West Bay on the western end of New Providence (Nassau is on the eastern end), turned out to be a perfect anchorage for us on our journey to the Exumas. If you don’t need to check in or re-provision in Nassau, West Bay provides a comfortable anchorage with a state park on the one side of the bay and wealthy residential homes dotting the rest of the Bay. It was a bit tricky getting in, but we were able to eyeball the shallow spots, so we crept in and found clear water with no surge. The bay is wide open to the west, and even northwest but, well protected from the south, north and east. Fellow cruisers hailed us to see if we wanted to join them in the morning for a trip to Whole Foods. Whole Foods provides a shuttle service from West Bay to their store so even if you need to provision this would be a “whole paycheck” option.

Posted on July 4, 2018 By sailingshenemere.com in Uncategorized

We only stayed one day at Bimini before we set sail to Andros Island. Andros wasn’t necessarily “the” destination as we were crossing the Tongue of the Ocean in SE 15-20 knot wind with 6-foot seas; our choices for safe anchorages in SE winds were limited to Chub Cay or Morgan’s Bluff; the latter being a better choice as the weather continued to deteriorate.
On this particularly difficult passage the seas had us tossing about and so the fuel tank was being sloshed about as well. We can only guess this is the reason for the fuel pick-up to get clogged. The engine was temporarily disabled before Martin was able to blow the gunk out of the fuel pick-up tube. Now we were motor sailing with an unreliable engine. Martin was able to rig a jerry can of diesel however that became a problem as we approached Morgan’s Bluff and the 5 gallons of diesel had run much faster than we had anticipated, and the engine died as we were trying to anchor in howling winds on a lee shore. We quickly got another jerry can in place and were able to start the engine and anchor just in time. The approach into Morgan’s bluff has a steep cliff with breaking waves; it is an intimidating entrance made more terrifying should the engine had failed only a few minutes earlier as we entered; we would have surely been tossed into the angry rocky cliffside.

Adrien and Martin safely on the hook in Morgan’s Bluff

Morgan’s bluff had a fascinating shipwreck that we enjoyed snorkeling around and meeting the fellow cruisers. 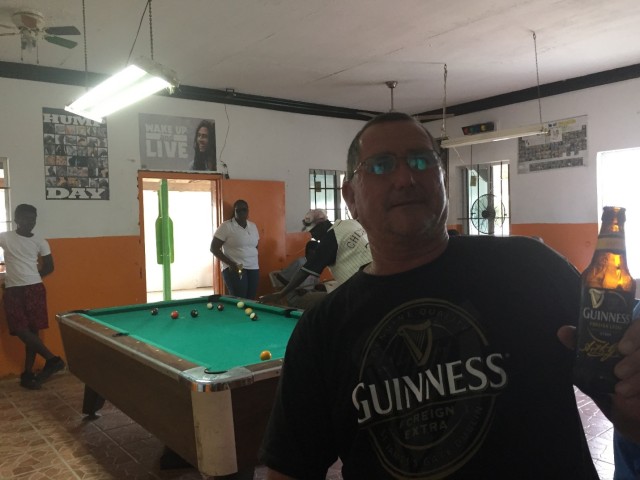 We met some hilarious locals; Tito and Norman and they picked us up every day for three days and drove us around the island showing us the sights, helping us find parts for the fuel tank and getting us set-up with phone service. The third day they arrived a bit late and explained they were out parting the night before; it was a holiday on the island everything was closed but no one could tell us what the holiday was for. Norman explained to us that the cops don’t enforce drinking and driving laws and might only pull you over to see if you had beer to offer them. Norman tells us there is nothing to do on the island so there is a lot of drinking.

The Gulf Stream to Bimini

Posted on July 4, 2018 By sailingshenemere.com in Uncategorized

The Gulf Stream is not to be underestimated; it is a 45-mile-wide river. You can’t see it’s speed, but it is always there flowing northward at an average speed of 2.5 knots. The Gulf Stream can be a hazardous stretch of water, so we patiently waited and watched for days before we left at 2 AM on the heels of a low-pressure system that had passed the day before. We made good time in relatively calm conditions arriving in Bimini by noon.
We tried to anchor off Big Game Marina, but it was too shallow so, we went up the channel and unsuccessfully attempted to anchor 2 more times because the bottom was grassy the anchor wouldn’t dig in. Finally we docked at the Marina.
Super nice cruisers from England and Argentina caught our lines and stayed around talking with Adrien and me for the 2 hours it took Martin to clear in with immigration.

Adrien on the dock at Big Game Club- Bimini 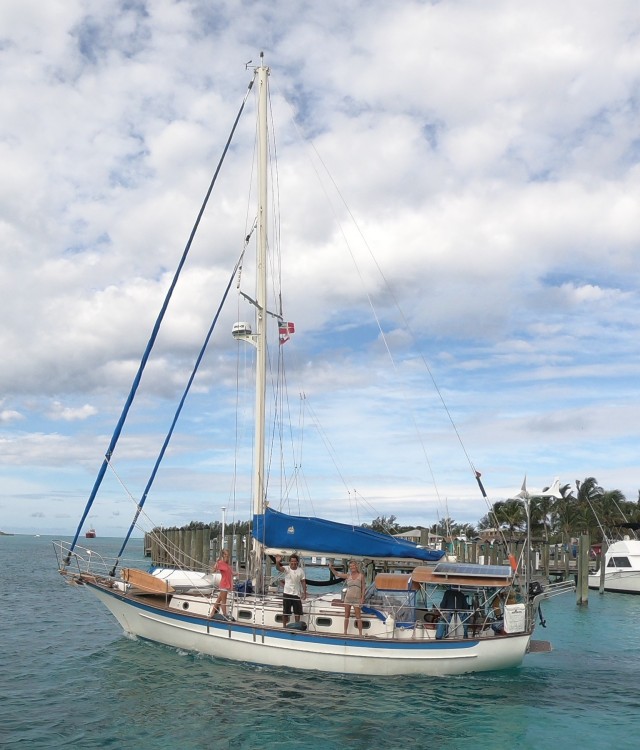 Martin’s catch of the day 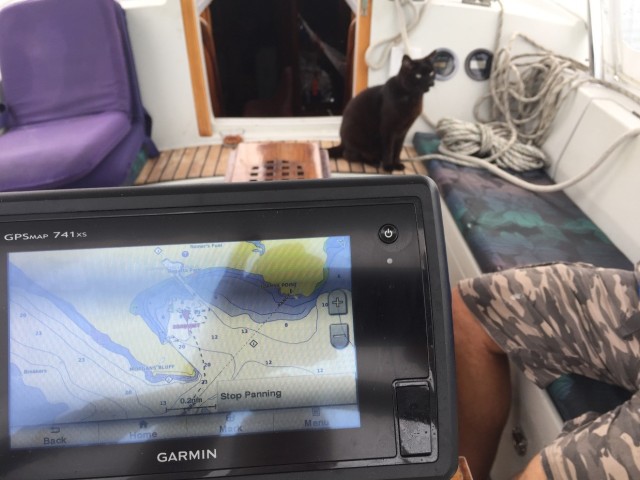 Posted on July 3, 2018 By sailingshenemere.com in Uncategorized

After all this planning; on the day we are set to leave we are still were running around loading up the boat, closing on the sale of my car and cleaning up the rental house. The weather is good to venture across the gulf stream to the Bahamas and its now Midnight. We are happy, excited to leave and saddened by the aspect of leaving our 19-year-old son in Miami. Justin will fly out to meet us in August before he starts the fall term however, there is little to console me from the notion of us leaving him behind. It should be your children leaving home and us dealing with the empty nest syndrome not the parents selling your childhood home and getting on a boat …. leaving the “child” behind.
Justin meets us at the boat for the final goodbyes; its awful. We cry and hug and cry. We are proud of him and trust he will be fine. I know I will miss him so much.

Standing in a cold shower ripping up $100-dollar bills

Posted on July 3, 2018 By sailingshenemere.com in Uncategorized

The saying goes…the happiest day of boat ownership is the day you buy the boat and the next happiest time is the day you sell it. We have for the most part enjoyed taking a 1986 Beneteau and making it our own. We spent huge sums of money getting her ready for the trip and tried to prioritize what was most important. We didn’t want to be the people that talked about cruising but still had “another” something to do on the boat before they left the dock which is sadly what happens to many.
We / “Martin” updated two of the three heads on board with Vacuflush systems and holding tank. He built a new refrigeration and freezer box in the galley. We spent many hot weekends replacing most of the hatches. Martin re-fit and installed new propane lines that are much safer and easier to use than what was initially onboard. We purchased a state of the art life raft on the deck and installed safety lines / “life lines” and bolts in strategic places allow us to conveniently tether ourselves in the cockpit and on deck in bad weather conditions.
Safety is a number one priority for us so, we ended up spending more money to upgrade the “EPIRB” Emergency Position Indicating Radio Beacon is used to alert search and rescue services in the event of an emergency.
Some of the more expensive items are a new foresail, mainsail and all new rigging and a new C-9ft Caribe dingy. New technology for navigating and self-steering were paramount. The self-folding Max Prop was upgraded to give us more efficient sailing.
A boat doesn’t appreciate and at best a few boats “hold their value”. As I log the money spent on this older boat it’s clear that this is the worst financial investment yet, hopefully the best spiritual investment!
Critical before heading out was the Haul Out. We spent a week grinding, filling and sanding the bottom of the boat and installing new folding Max Prop

Finally, the most difficult yet the most well spent time, money and energy was investing in a new hard dodger cover for the cockpit. Martin built a hard dodger in our backyard over the course of three months. Working with his buddy Enrique on evenings and weekends he built a reinforced fiberglass hardtop for the cockpit. Sanding and grinding many layers of fiberglass was a tedious and dirty job. I am sure our neighbors weren’t to happy to have the fiberglass dust on their cars over those months. The result is a solid, well insulated and reinforced top over the cockpit.

Initial frame of the dodger 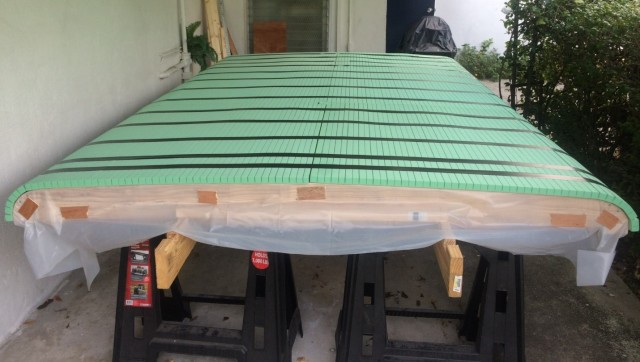 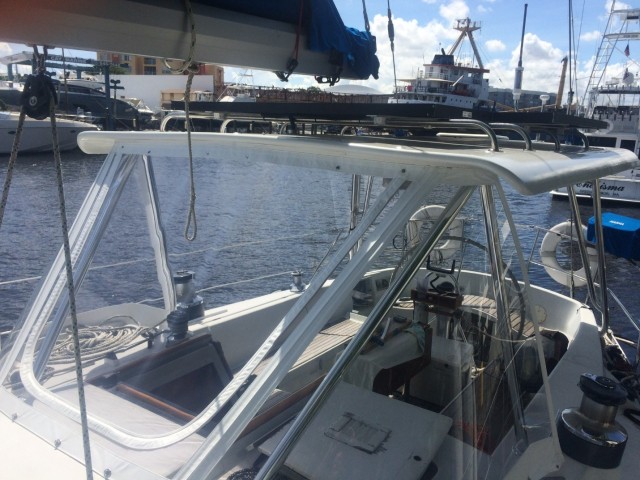 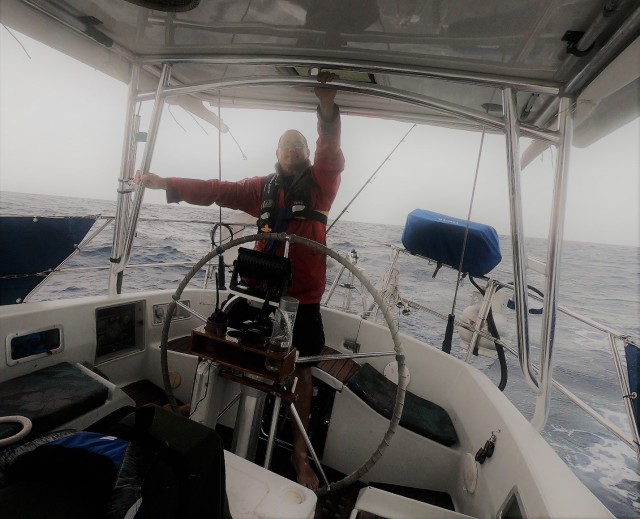 Martin enjoying the benefits of the dodger underway

Dream your life, Live your dreams

Posted on June 13, 2018 By sailingshenemere.com in Uncategorized

We arrived in Miami, Florida in 2000 after working and sailing in the Caribbean and ultimately sailing the South Pacific to New Zealand where our son Justin was born on New Years Day (International date line made his claim to fame as being one of the first children born in the world in 1999). With our new family we decided to sell 33 ft Topaz and head back to the States to start our next adventure…citizenship, careers and family. We knew when we arrived that we were planning to buy another boat and set sail again in the future. Our initial timeline was 5 years. 20 years later we are finally off the dock. 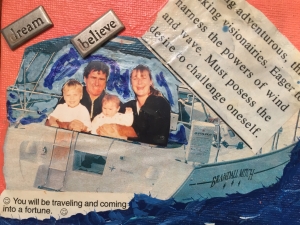 I created this dream board in 2000. Ten years later we bought Shenemere which happened to be a Beneteau similar to the boat pictured here that was randomly cut out of a magazine…Believe!

Posted on June 13, 2018 By sailingshenemere.com in Uncategorized

Thanks for joining me!