Posted on July 4, 2018 By sailingshenemere.com

We only stayed one day at Bimini before we set sail to Andros Island. Andros wasn’t necessarily “the” destination as we were crossing the Tongue of the Ocean in SE 15-20 knot wind with 6-foot seas; our choices for safe anchorages in SE winds were limited to Chub Cay or Morgan’s Bluff; the latter being a better choice as the weather continued to deteriorate.
On this particularly difficult passage the seas had us tossing about and so the fuel tank was being sloshed about as well. We can only guess this is the reason for the fuel pick-up to get clogged. The engine was temporarily disabled before Martin was able to blow the gunk out of the fuel pick-up tube. Now we were motor sailing with an unreliable engine. Martin was able to rig a jerry can of diesel however that became a problem as we approached Morgan’s Bluff and the 5 gallons of diesel had run much faster than we had anticipated, and the engine died as we were trying to anchor in howling winds on a lee shore. We quickly got another jerry can in place and were able to start the engine and anchor just in time. The approach into Morgan’s bluff has a steep cliff with breaking waves; it is an intimidating entrance made more terrifying should the engine had failed only a few minutes earlier as we entered; we would have surely been tossed into the angry rocky cliffside. 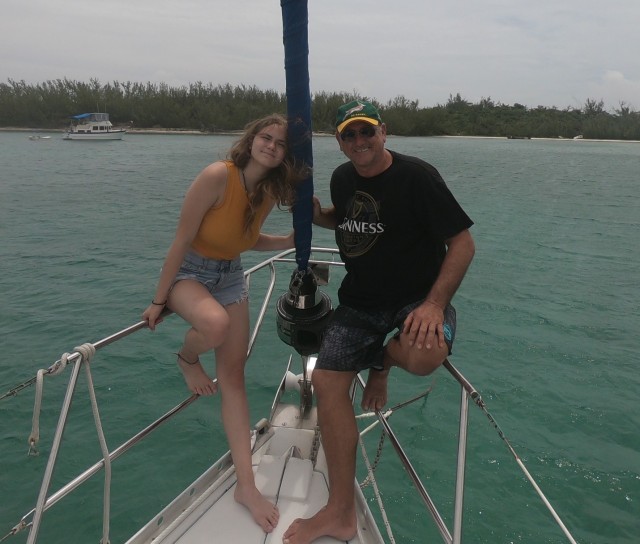 Adrien and Martin safely on the hook in Morgan’s Bluff

Morgan’s bluff had a fascinating shipwreck that we enjoyed snorkeling around and meeting the fellow cruisers.

We met some hilarious locals; Tito and Norman and they picked us up every day for three days and drove us around the island showing us the sights, helping us find parts for the fuel tank and getting us set-up with phone service. The third day they arrived a bit late and explained they were out parting the night before; it was a holiday on the island everything was closed but no one could tell us what the holiday was for. Norman explained to us that the cops don’t enforce drinking and driving laws and might only pull you over to see if you had beer to offer them. Norman tells us there is nothing to do on the island so there is a lot of drinking.

← The Gulf Stream to Bimini
Andros to Nassau or West Bay? →