Posted on August 29, 2018 By sailingshenemere.com

It’s a postcard-perfect scene…Grand Anse Beach is “the granddaddy” of Grenada’s 45 beaches. This two-mile stretch of creamy-white sand overlooks a sheltered, azure-hued bay where bright red and yellow fishing boats burst with color.
We enjoyed an afternoon with Mandy, Leslie and the coolest dog ever (Mandy’s dog) Eli on the beach the day before the Grenada Carnival began. Festivities were already underway with a party jamming behind us while we soaked up the soca sounds and scene.

Don’t let this peaceful mystical lady Mandy fool you. It was on the beach she talked me and only me (Martin and Adrien would have no part) in going to the Jab- Jab Mas the following morning starting at 4:00 AM. 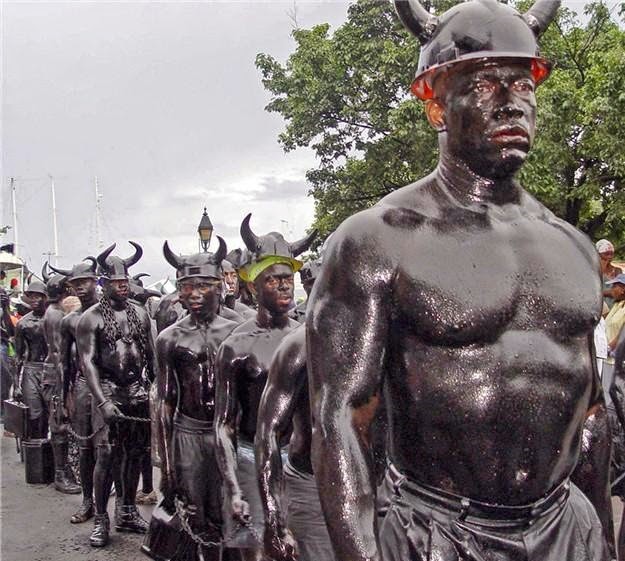 Jab-Jab
I had been told about the Jab-Jab carnival celebration before Mandy talked me into it. Fellow cruisers gave mixed bad reviews of a crazy party in the streets where everyone is covered with motor oil and snakes around their necks; dancing to outrageously loud music starting at 4 AM after partying All night. I thought to myself,  you are old and that sounds like something I must see!

This is the only video I took at Jab Jab. Mandy and Leslie dancing while I was the proverbial “turd in a punch bowl”

A quick history lesson on the ceremony would have helped me to comprehend the scene unfolding in the following wee hours of morning so here is my condensed version:
The word jab has its roots in the French word “Diable,” meaning “devil.” Thus, in the Grenadian context, Jab Jab, means “devil, devil”

It is a parade of masqueraders acting out the actions done by a people they believe to be the devil. The devil’s historical connection is to fight against slavery.
The historic symbolism of the parade is slavery and I saw plenty of chains being carried and dragged through the streets.

I also saw other symbols of “constraints” imposed on people including briefcases, baby strollers, computers and even a flat screen TV!

Spice Mas – A celebration with the pomp and pageantry like the mother of Carnivals. Grenada’s carnival is indeed a celebration of the artistry, uniqueness, and vibrancy of the nations people. Colorful costumes, competitions and an outpouring of talent go along with the celebrations. It was a super fun 3 days of steel pan drums, costumes and parting had by everyone on the island.

Grenada Swim Team Fundraiser
The Grenada swim team has been preparing for a National competition in Barbados. Julian an up and coming star of the team was struggling to afford to attend the event. So, a shout out to the cruising community went out and within a week a Lambi “conch” Stew beach party was put together.

Over 50 people showed up contributing more than EC $2,930 / US $1,105 in one day.
Julian went on to the swim meet to win medals and lead the team to a National victory. Fantastic support for the local Grenadians from a grateful group of sailors.

Nigel Heath cooked up the huge pot of Lambi Stew and we provided the rice. At EC$20 per bowl we raised the money for Julian to attend the swim meet. 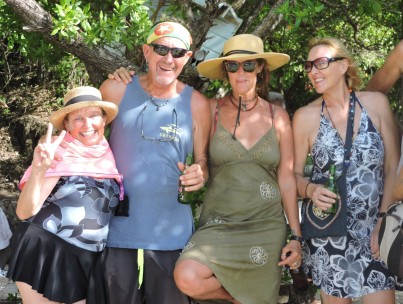 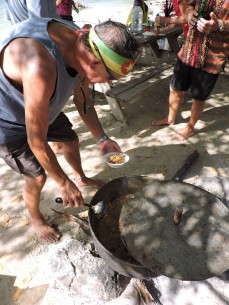 Venezuela Earthquake
A 7.3-magnitude earthquake rocked Venezuela on Tuesday August 22nd after hitting off the coast near Yaguaraparo in a disaster authority have called the “largest historic event” since 1900.

Here in Grenada just 180 miles away the quake was felt on land and at sea. We were all on the boat when the earthquake was felt, for three minutes the boat rocked and quivered. Only Adrien knew what it was; I thought the mast was falling down. The quake wasn’t nearly as scary as the subsequent Tsunami Watches that came after the initial quake. Fortunately, the earthquake was some 58 miles beneath us and didn’t have any real tsunami threat.