Posted on July 8, 2018 By sailingshenemere.com

After a few days in Luperon we met other cruisers making their way to Puerto Rico and further to Granada. We all had the something in common…waiting for the winds to subside enough to get out and on our way east. After a week of daily weather conferencing with the folks “in the same boat” we all managed to head out of Luperon with the intent of getting to at least Samona, Dominican Republic, Turks or ultimately Puerto Rico…basically as much Easterly we could make before the very small weather window closed.
Luperon, DR to Boqueron, Puerto Rico
Another into the wind three-day sail. We left Luperon at midnight and had a “Bucking Bronco” windward sail along the North coast of Dominican Republic through the Mona passage into the western coast of Puerto Rico. We first came to the western port of Mayaguez, Puerto Rico only to check in with customs; although this is the proper protocol (the port of call for immigration) it turned out to be a huge mistake. First, we were the only boat on a leeward side of the bay with the wind blowing and poor holding for the anchor. Secondly, there wasn’t a dingy dock, so we beached the dingy in a really sketchy area. Thirdly, it is now noon and blisteringly hot as we walked around town trying to find the immigration office. We met some locals that gave us a rough description on where the office “might” be. They offered to tell us our dingy wouldn’t be safe unattended, so I volunteered to keep an eye on the dingy while Martin and Adrien stumbled around town and were treated rudely by the immigration officer when they finally found the office. Once this clearing in saga was complete we got the hell out of dodge; headed to Boquerón. 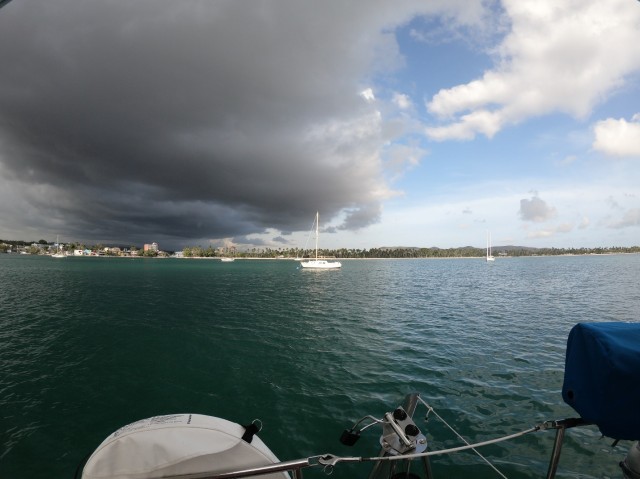 Boquerón, Puerto Rico on our approach
Boquerón, Puerto Rico
Once a small fishing settlement, Boquerón is now a popular tourist and college hangout. Boquerón has a bohemian town atmosphere with a beautiful beach. A large shoal in the center of the bay as you approach offers a bit of protection with two easy entrances from either the north or the south.

Cute little “Key West” kind of town; a lot of beautiful murals and folks strolling around town with a drink in hand.
Our first night we treated ourselves to a “real” meal at a popular restaurant: steak, pork, chicken wings and fruity drinks was heaven to our deprived pallets 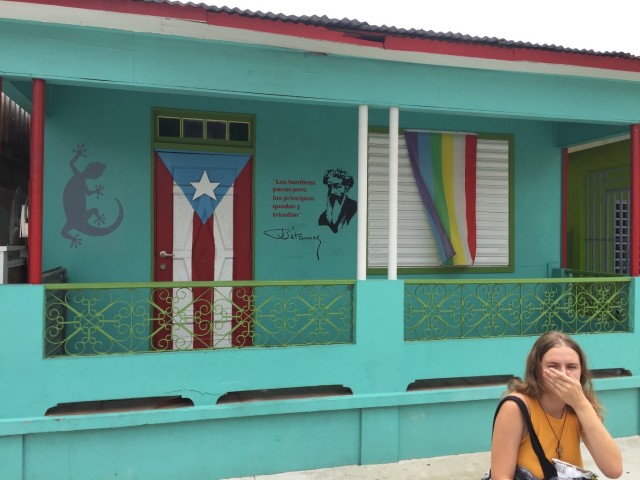 Wednesday night we stumbled into the local gay and lesbian bar; the live acoustic guitar, murals in the court yard and super fun company made for a great night out

During the day we made trips back and forth from Club Nautico de Boquerón lugging jerry cans of water because we didn’t trust using the water maker in the bay. We found out days later the water was just fine for making water. S/V Sea Forever our “Buddy Boat” with Deb and Brian arrived the next day so we all went out to celebrate our good fortune…fair winds, safe passage and great restaurants to hang our hats for a few days waiting again for the next weather window so we could head further east along the coast.
Boquerón does not have any of the services we really needed; taxis, phone/ internet or laundry. It was a few days before we organized a car to get us to the next town over to get phone service and groceries. A few days later we all shared in a car rental and traveled an hour out to a town that had a laundry mat. Between us all we had 7 loads of laundry and had to manage getting it done with only 4 working washers and 1 dryer because of the aftermath of hurricane Maria.
South East Puerto Rico has been working on the recovery efforts; the sound of hammering and chain saws are a constant along with signs of massive destruction everywhere. People here are hard working and eager to get back to where they were pre-storm; if that’s possible…the electrical grid is very fragile.